#Success: In between Delta & Omicron, this travel advisor hosted a group safari in East Africa

There’s nothing simple about organizing a safari in East Africa for 28 people during a global pandemic.

Just ask Toronto-based Paul Chin-Aleong, a senior travel advisor at New Wave Travel, who successfully escorted clients on an adventure of a lifetime through Kenya and Tanzania from Nov. 9 – 20, 2021.

“We made it happen,” Chin-Aleong told PAX, reflecting on the “stressful” booking that took two years to get off the ground. “But everyone got there, and returned home, safely.”

For Chin-Aleong’s booking of 28 guests – a mix of “new friends and old friends” from Canada to California to Florida to Illinois to as far as Saint Lucia and Trinidad – the trip was more than 10 days of African bliss as the travellers toured famous landscapes, like Maasai Mara National Reserve and Serengeti National Park, saw "Big Five" animals in the wild, flew in hot air balloons, visited the Ngorongoro Crater and slept in high-end hotels and luxurious tents.

“It was truly a trip of a lifetime,” Chin-Aleong said, reflecting back on the ride. “There were no mishaps, no missed flights, no flights cancelled. Everything worked out. Thank god.”

Safer there than here

But the journey behind the scenes was only possible thanks to Chin-Aleong’s razor-sharp organizational skills, professional instinct and ability to navigate travel amid a global health crisis.

The experienced travel advisor, who has been hosting group excursions since 2001, had a bit of luck on his side.

The safari, headed by Abercrombie & Kent, a luxury travel company that focuses on private tours and small-group adventures, took place during a window of opportunity in which Canada had just lifted its non-essential travel advisory, albeit quietly, for the first time during the pandemic, and the health situation was unsullied by the Omicron variant, which took hold not long after the trip. 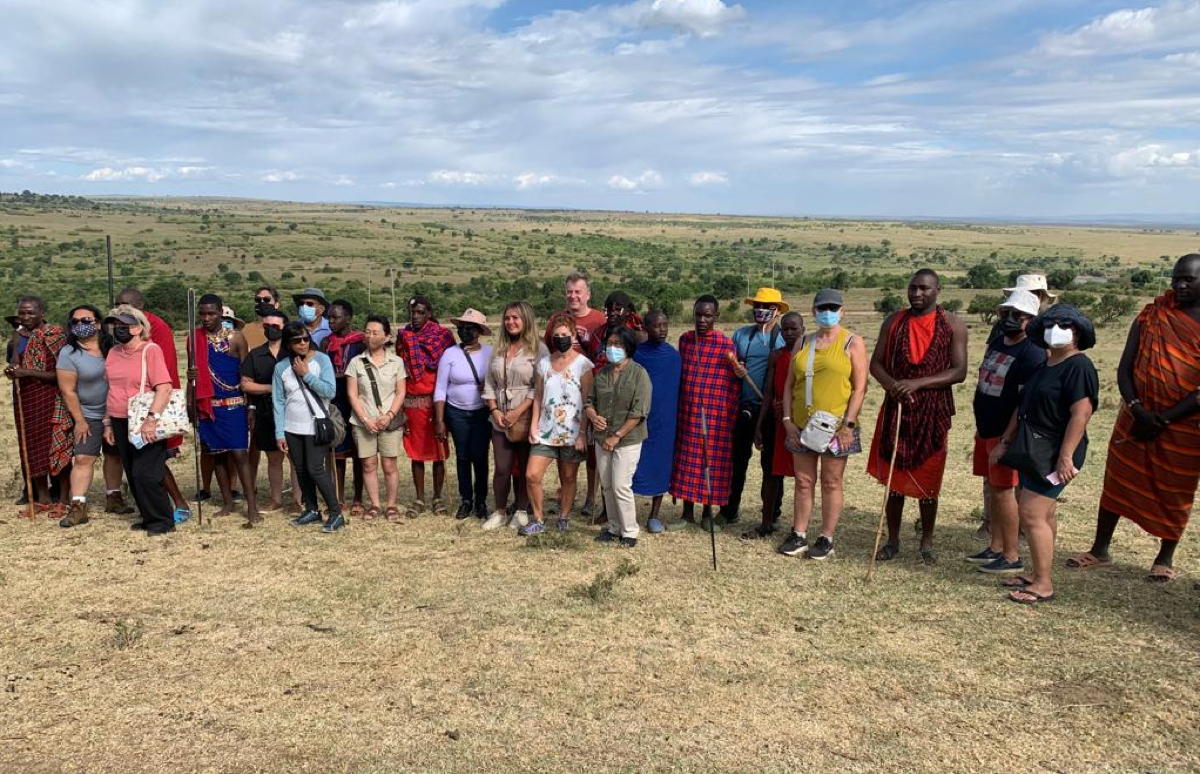 Kenya and Tanzania, also, “never really closed,” Chin-Aleong said, and a safari is the type of trip that takes place almost entirely outdoors.

“I wouldn’t have gone if I felt it wasn’t safe to go,” Chin-Aleong said.

Being primarily outdoors, in fact, made it comfortable and welcoming for everyone, he said, “as we were not confined to travelling in enclosed coaches and buses daily.”

“We were in open-air vehicles on game drives every day.  All our local flights were chartered for our group alone, so we were always in our own bubble. We dined together every day, and at most lodges, our group occupied the entire property.”

“Never once did we feel overwhelmed by crowds or unsafe.”

It also helped that all staff at hotels and lodges were fully vaccinated, he said.

“We felt safer there than being back home here.”

Two years in the making

But getting to this point wasn’t easy. The safari was Chin-Aleong’s two-year baby – a file he began plotting out in 2019, with a planned October 2020 departure, but ultimately postponed a year later as the pandemic took control.

Moving a safari due to a pandemic can present a web of logistics, which Chin-Aleong ultimately had to work through.

After postponing the trip, his days were spent cancelling and rescheduling clients – a loyal group that joins Chin-Aleong on trips regularly – as people weighed their options while remaining skeptical over the future of global travel.

“We stayed positive,” Chin-Aleong said, noting how the trip, one of the more expensive ones he has promoted, initially sold out within a month.

Some people did cancel, but Chin-Aleong held onto his rooms, a strategy that paid off as his group, over time, grew in numbers – far beyond the 20 spots he originally planned for. 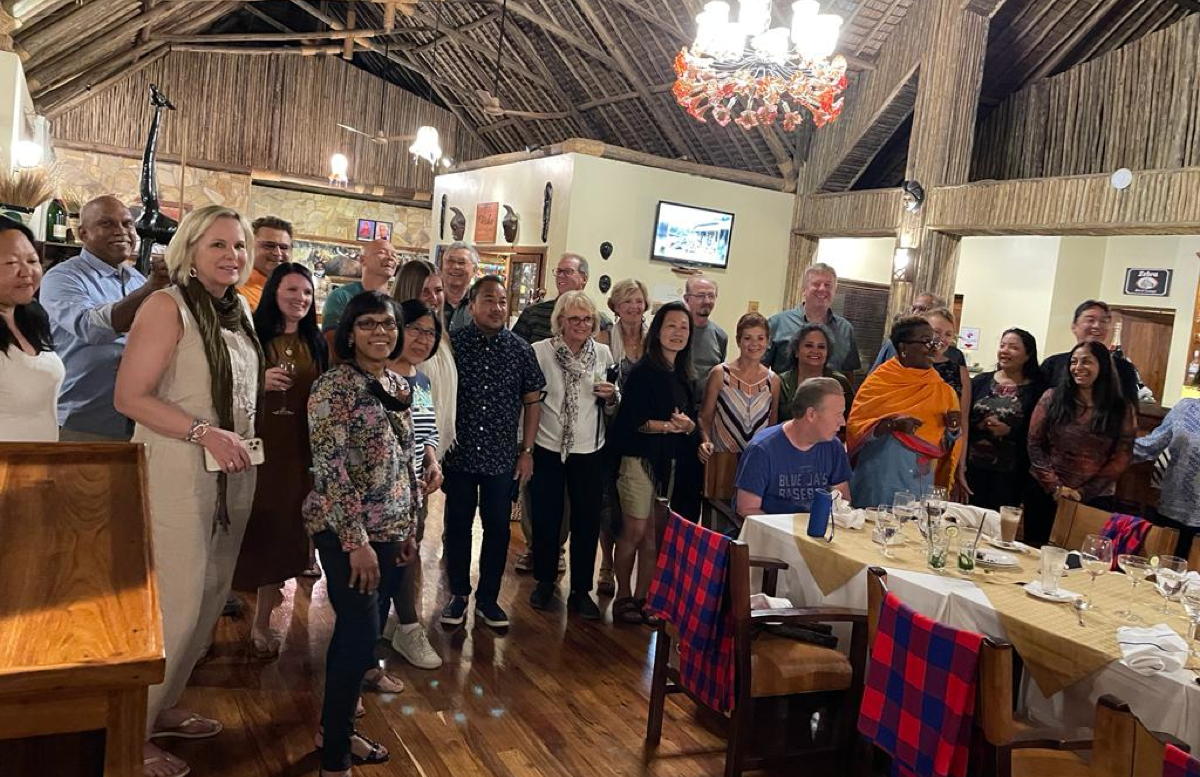 Then there was the work of keeping tabs on shifting border protocols and visa requirements, and coordinating pre-departure PCR tests for 28 different clients who live in different countries.

And, not to mention Chin-Aleong’s own pre-departure test. What if he, as the group’s “fearless leader,” tested positive prior to departure day?

“I couldn’t relax until we actually got there, up until two days before trip. I kept thinking: ‘I’m leading this group. What if I test positive? These people are depending on me to show up.’”

That, fortunately, didn’t happen, and Chin-Aleong was able to escort the safari as planned.

In fact, Chin-Aleong’s own role, as group escort, was enough to temper any concerns his clients had about travelling during COVID.

“If they’re going with me, they’re in safe hands. They trust me,” he said. “That’s one of the reasons I continue to get a following.”

“Everybody had good things to say"

One thing that did change, however, was the price: Chin-Aleong estimates the cost of the trip increased by $600 due to COVID-19 testing – an expense that was practically unheard of in 2019 – plus the added cost of insurance.

“For a trip like this, though, it was worth every penny,” Chin-Aleong said. “Everybody had good things to say.”

Chin-Aleong forwarded PAX emails his clients sent him after the trip, and “out of this world,” “memorable and amazing” and “breathtakingly beautiful” were among the most-used words his guests used to describe their experience.

Which is music to Chin-Aleong’s ears.

“I was just so relieved that everything went so well,” he said. 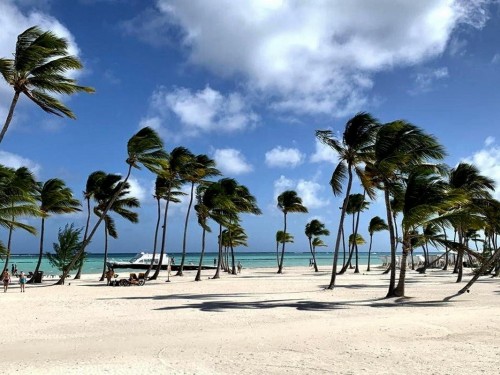