On Location: Canadian “rock star” agents go above & “beyond” with Celebrity

Canadian travel advisors are going above and “beyond” to expand their knowledge this week as they sail the Western Caribbean on board Celebrity Cruises’ newest ship, Celebrity Beyond.

Celebrity’s “Rock Star FAM” from Nov. 8 to 13 – which PAX is covering on location, exclusively – involves 21 travel agents from The Travel Agent Next Door (TTAND) and unfolds as Beyond, fresh off of two back-to-back trade sailings last weekend, makes her inaugural voyage from Fort Lauderdale, Florida to the Caribbean.

Learning at sea is a key part of Celebrity’s commitment to providing the trade with immersive training. 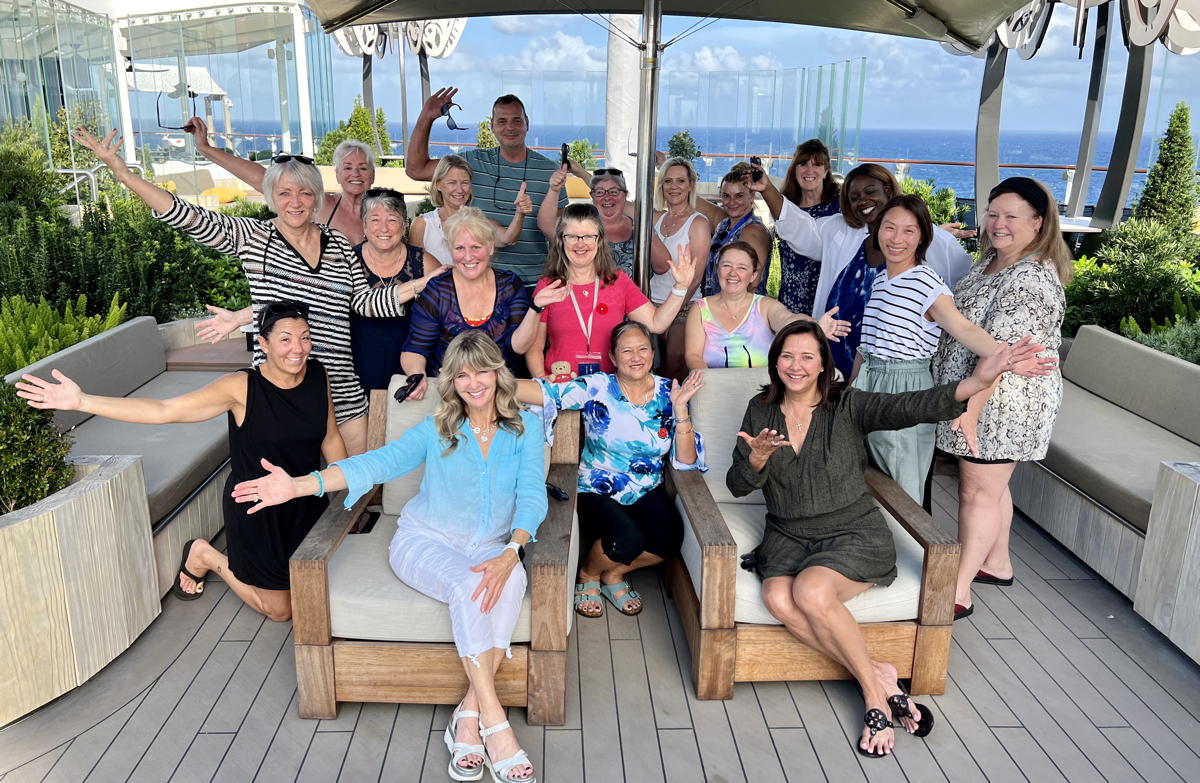 After all, as Brenda Lynne Yeomans, key account manager for Canada at Celebrity Cruises, puts it: “You’ve got to experience it to sell it. You’ve got to believe in it.”

To participate in the cruise, TTAND agents had to qualify by submitting their marketing plans in advance and complete Celebrity’s latest training modules.

In addition to experiencing all elements of the ship – which has made stops in Costa Maya and Cozumel, Mexico – agents also attended a Celebrity master class on Wednesday (Nov. 9), led by Yeomans herself, where they exchanged sales strategies and learned about ways to boost business.

TTAND has assigned its advisors to report back on various aspects of the ship, from the restaurants to the staterooms to operations to excursions. 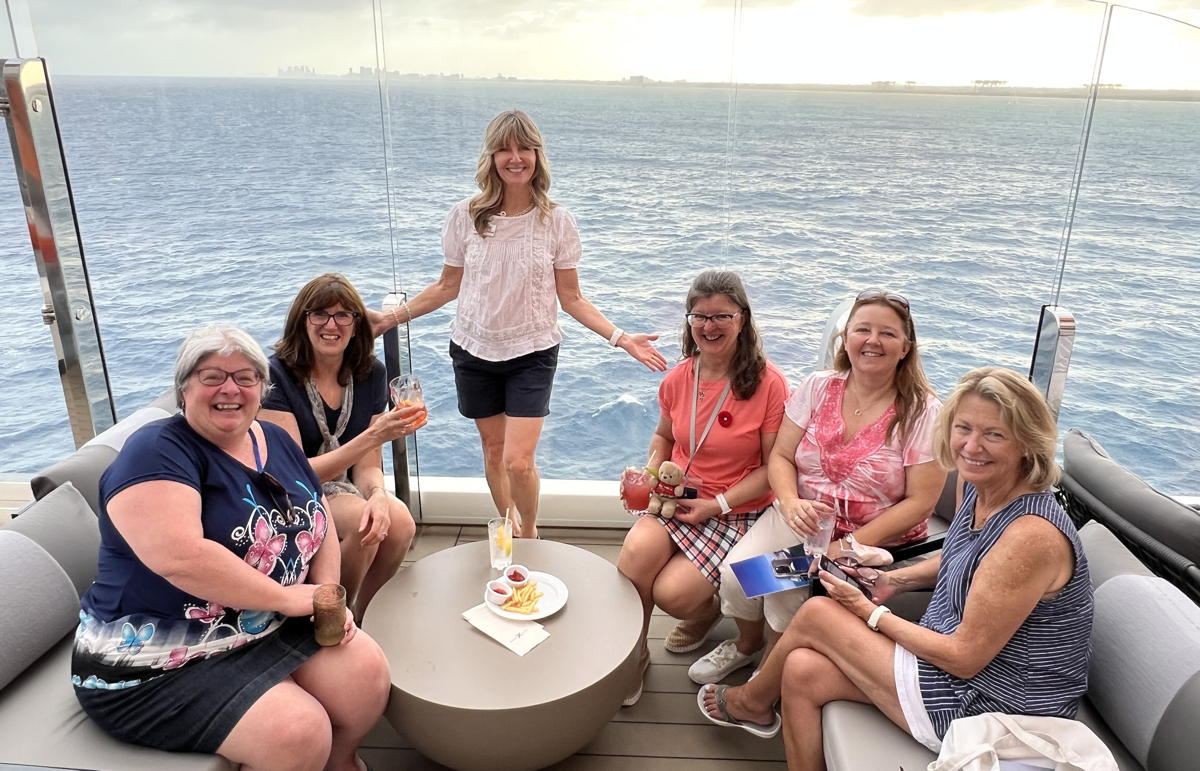 It’s a diverse group, too. Some agents are top Celebrity sellers, invited on board as mentors. Others are new to the brand, discovering it for the first time. For some travel advisors, it’s their first cruise – ever.

But a common thread is a willingness to go “beyond” the usual sales volumes and take Celebrity business to new heights.

“I am super impressed with how prepared they are,” Yeomans told PAX during an interview on “The Magic Carpet,” a cantilevered, floating platform that’s found on all Edge-Series ships. “They're prepared, they're ready to learn.” 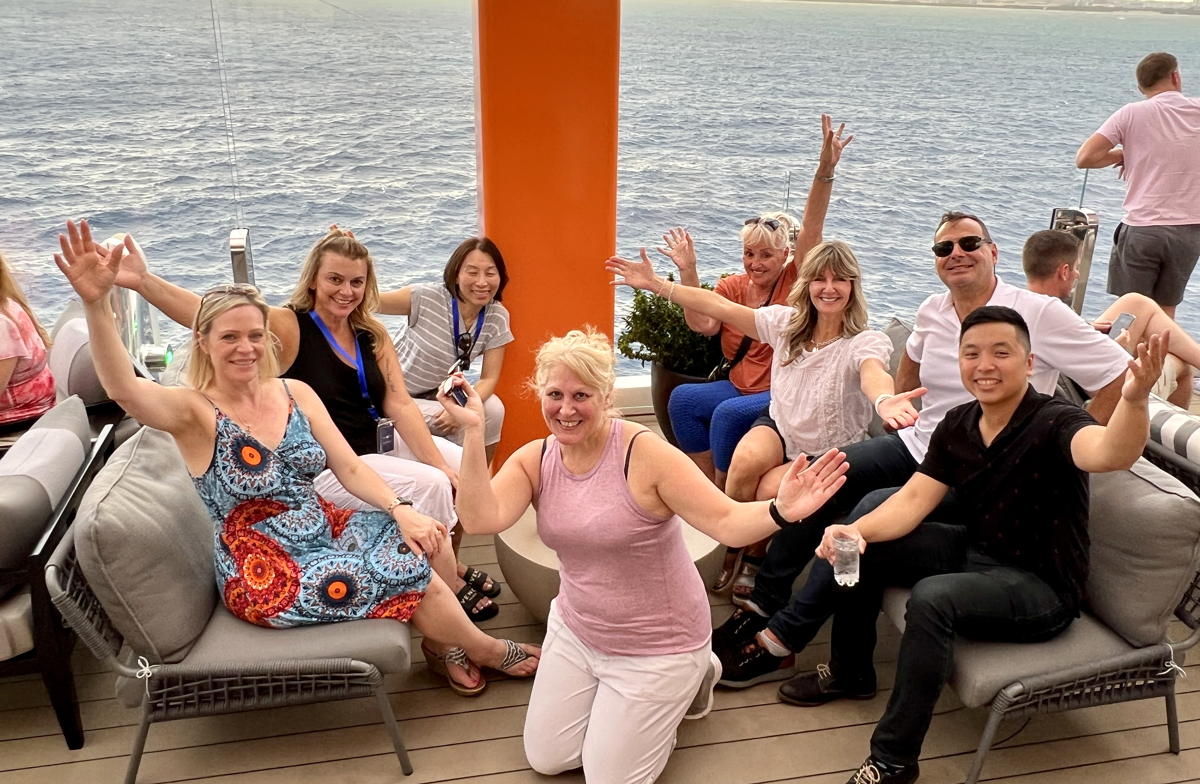 Celebrity Beyond, which made her U.S. debut in New York last month following a series of European sailings earlier this summer, is the third ship in the line’s high-end Edge Series.

Size is a key differentiator on Beyond – at 1,073 feet-long and 17 decks high, the ship is both longer and taller than its predecessors Celebrity Edge and Apex. 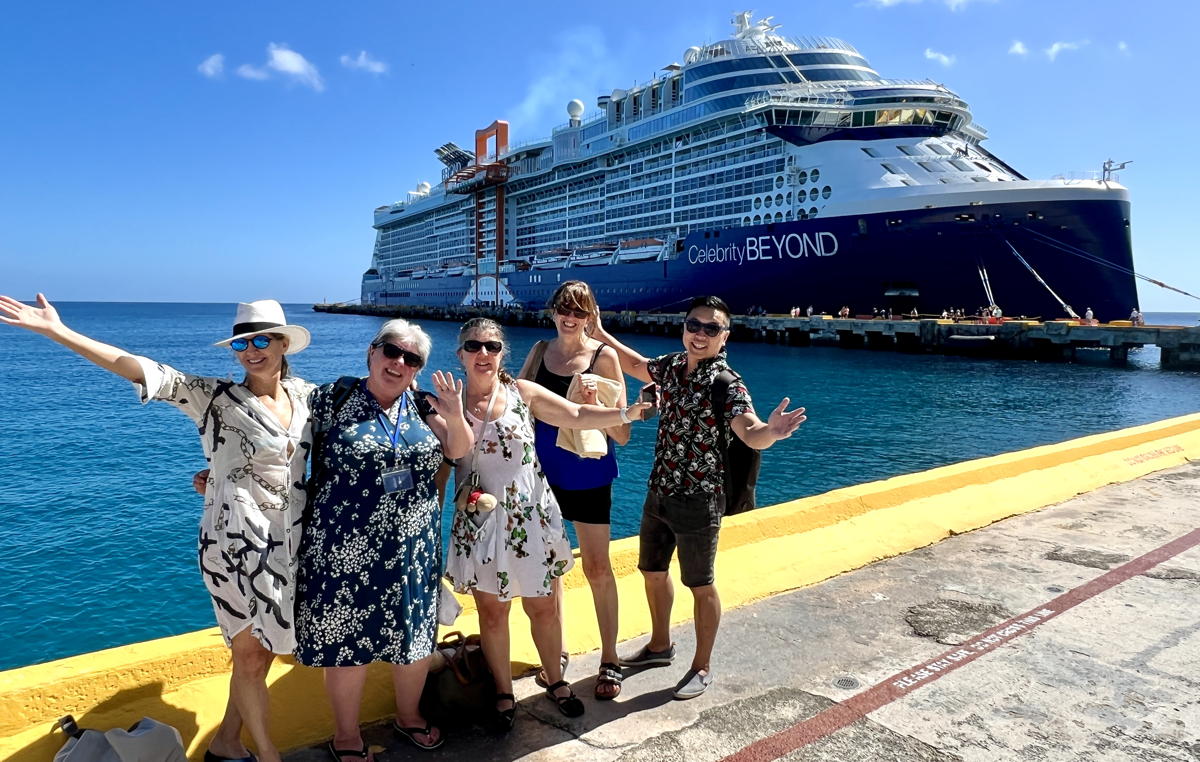 Spaces have also been reimagined, such as the outdoor, Moroccan-inspired, Nate Berkus-designed Deck 15 Sunset Bar, which is now 180 per cent larger with tiered levels. 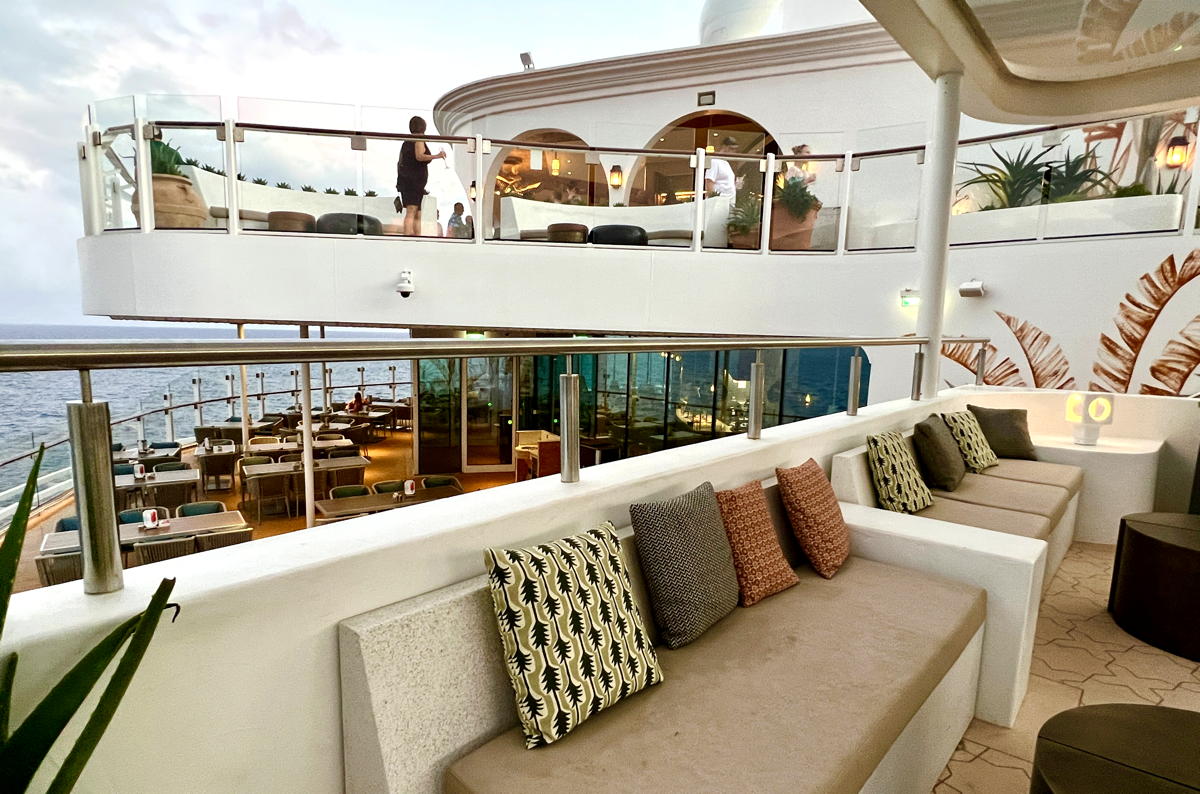 The Retreat, an exclusive “resort-within-a-resort” area for suite guests, also has more deck space and units due to high demand.

There are “tweaks” and additions, too. For instance: there’s a new bridge on Deck 5 overlooking the dazzling Grand Plaza (where the Martini Bar has been moved to centre). 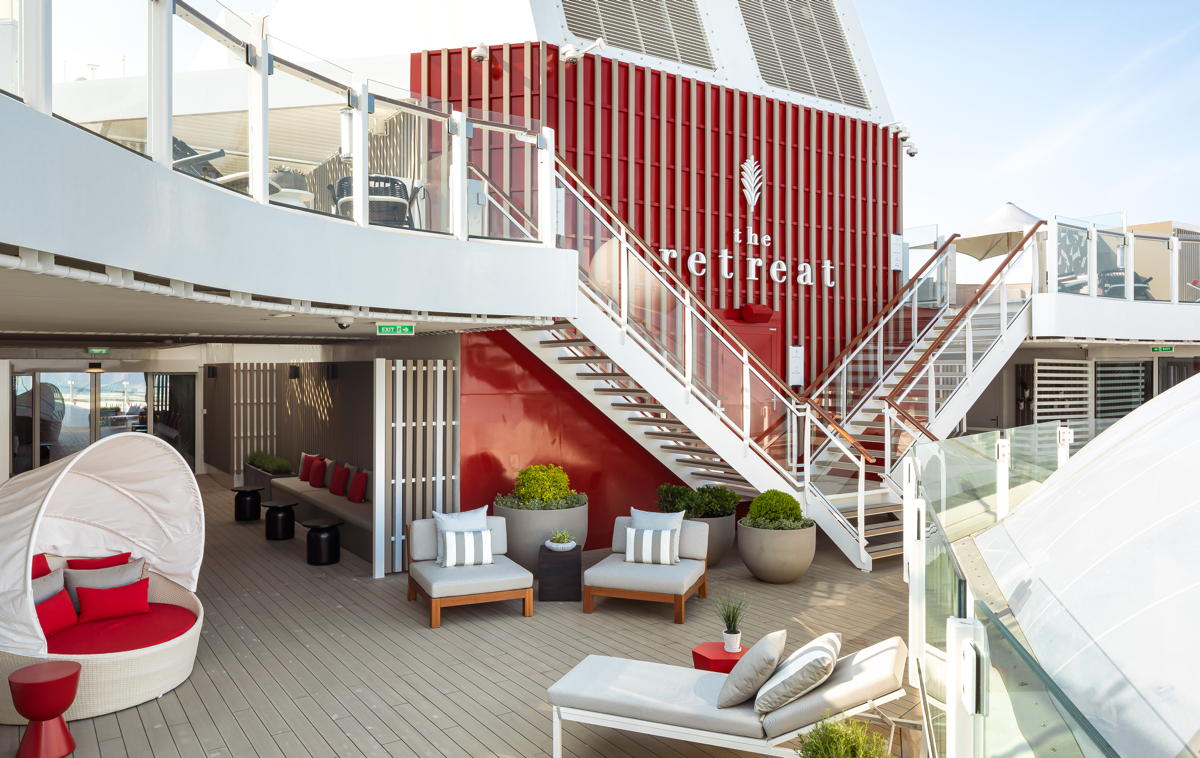 On Deck 15, near the Rooftop Garden, there are two new infinity pools made of clear glass, overlooking the ocean.

Some restaurants are larger and fitness spaces have also evolved – the motion studios for F45 and spin classes now face the sea, allowing more natural light to pour in.

“Relaxed luxury” is the term that sums up the onboard experience, which is in part thanks to chic and modern spaces conceptualized by British designer Kelly Hoppen. 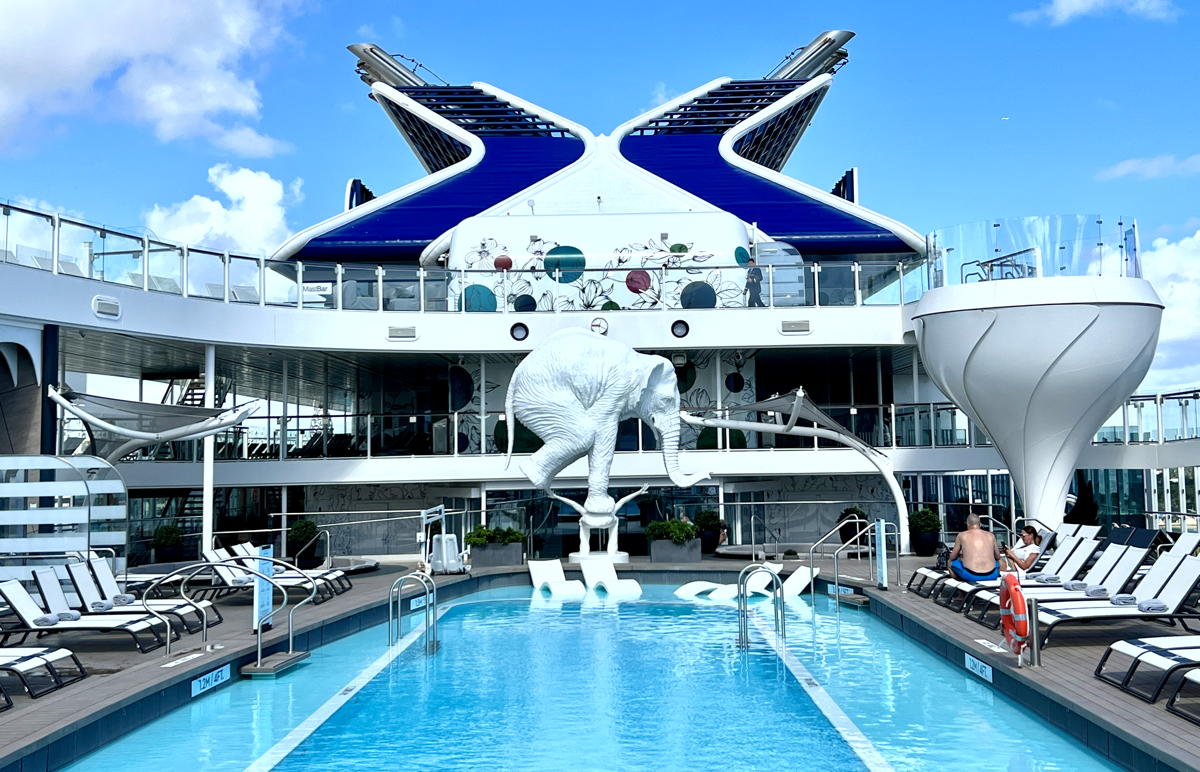 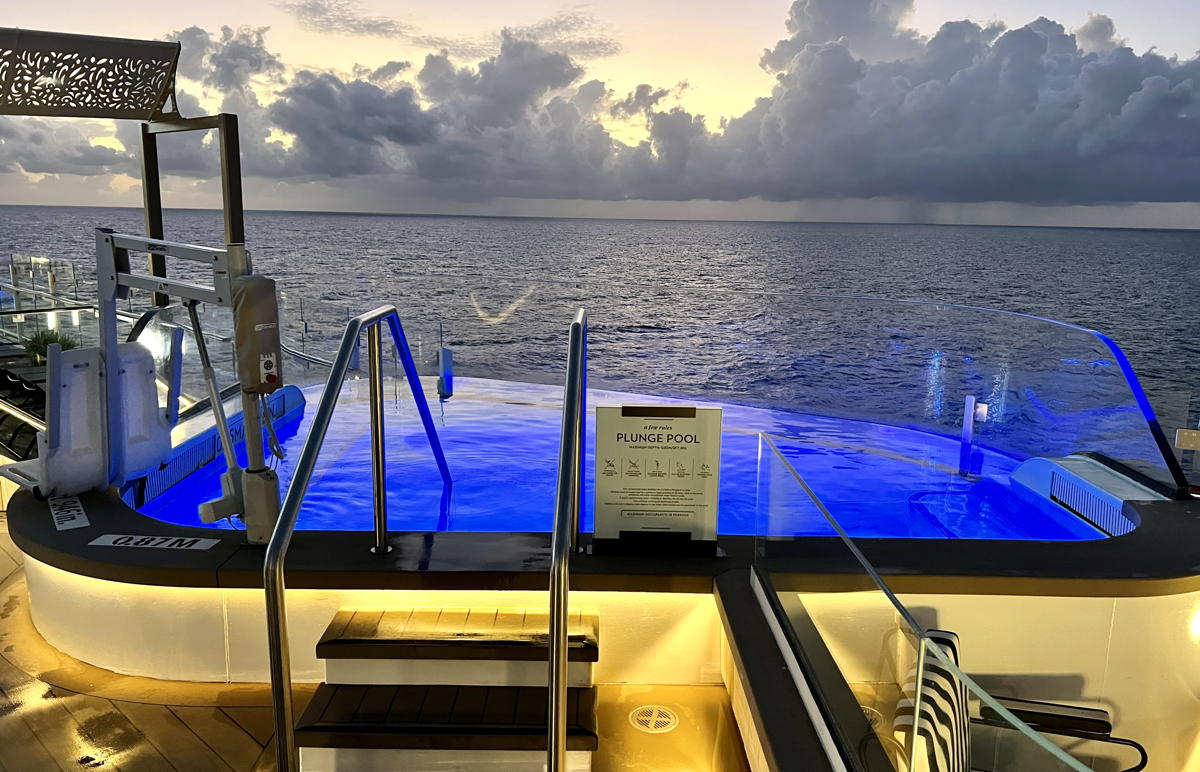 “This ship is all about the vibes – the emotions you get when you're on board,” Yeomans explained, noting the abundance of art, sculptures and plant life. 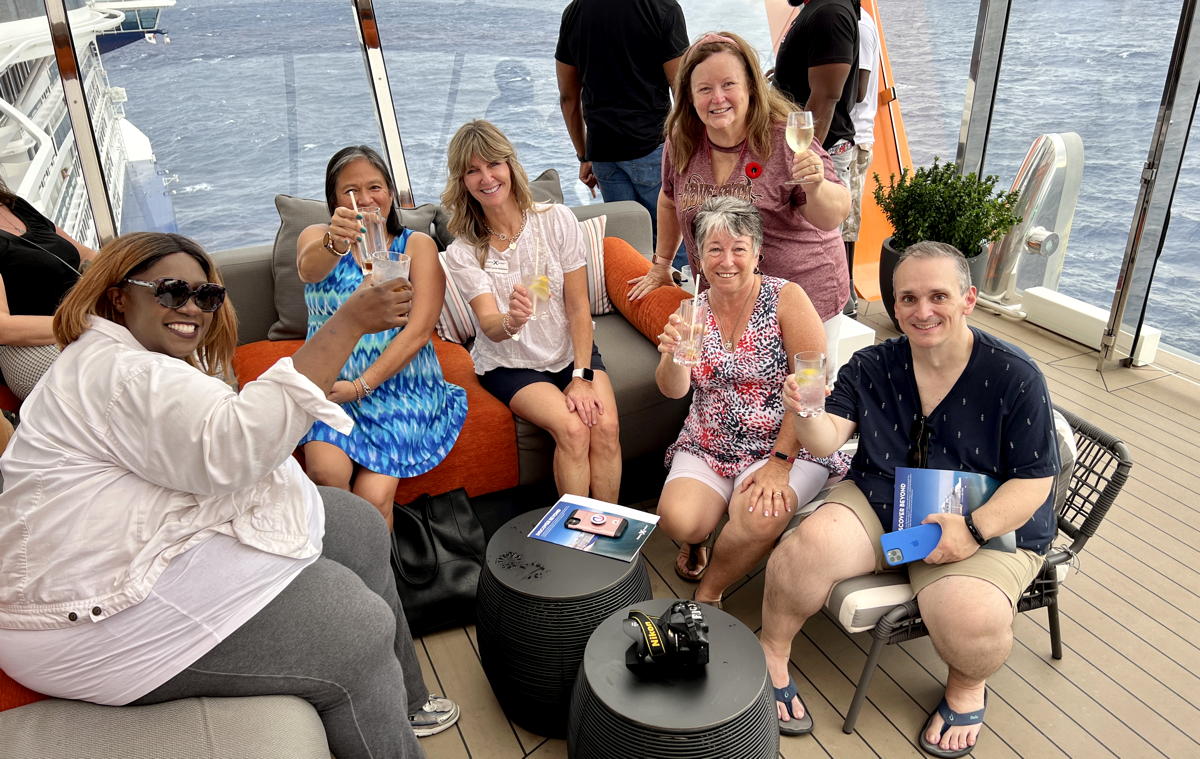 “Seeing is believing,” said Dondra Ritzenthaler, senior vice-president of sales and trade support and services at Celebrity Cruises, speaking on the importance of having agents engage with Beyond.

“When we try to explain things like Le Petit Chef restaurant, [known for its 3D table animation art], or the technology that the screen in The Theatre has, it sounds great and you just assume you understand what it means. But when you get here, and you touch it, feel it and you are part of it, it completely changes the perspective of what this brand stands for.” 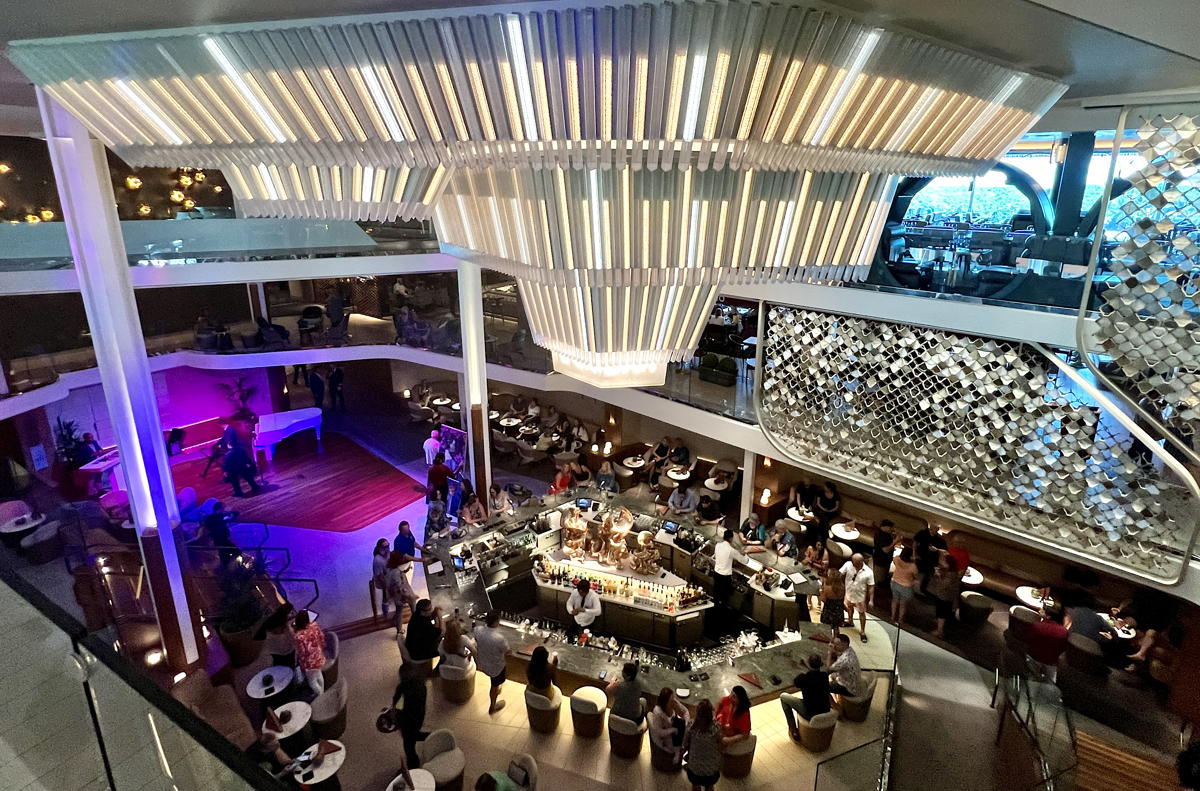 Especially for travel advisors in Canada who can’t board ships as easily as folks in Florida can.

“We know when they go home, they will feel even more confident that this is a brand that they would trust their customers with,” Ritzenthaler told PAX.

TTAND agents this week have been sharing their Beyond experiences with colleagues and clients via social media by noting the @celebritycruises handle and the #celebritybeyondfam hashtag.

Yeomans has even been holding daily contests, with prizes, for the best posts (with PAX acting as a special guest judge). 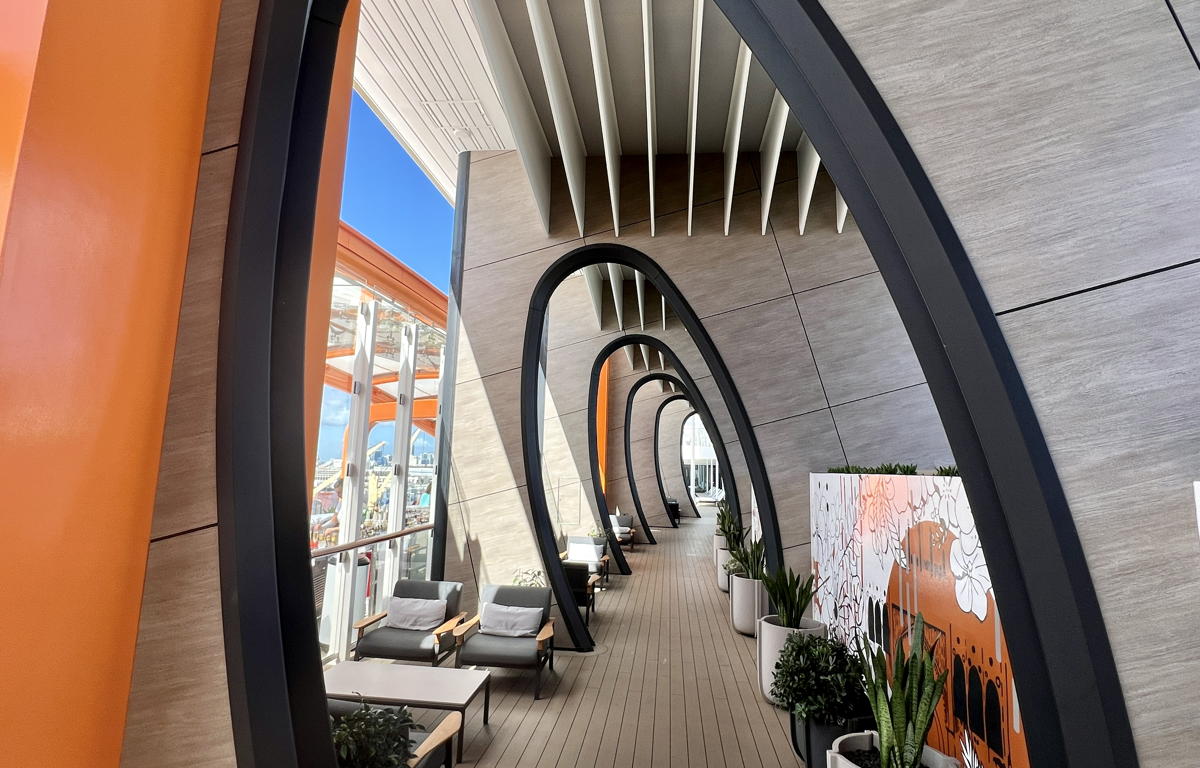 From the eclectic Rooftop Garden to Eden, a multi-level restaurant and performance space with creative cocktails and leafy art installations, to a sculpture of a life-sized white elephant balancing on a man's back at one end of the main pool, to high-quality shows and entertainment, every “world” on Beyond has social media power. 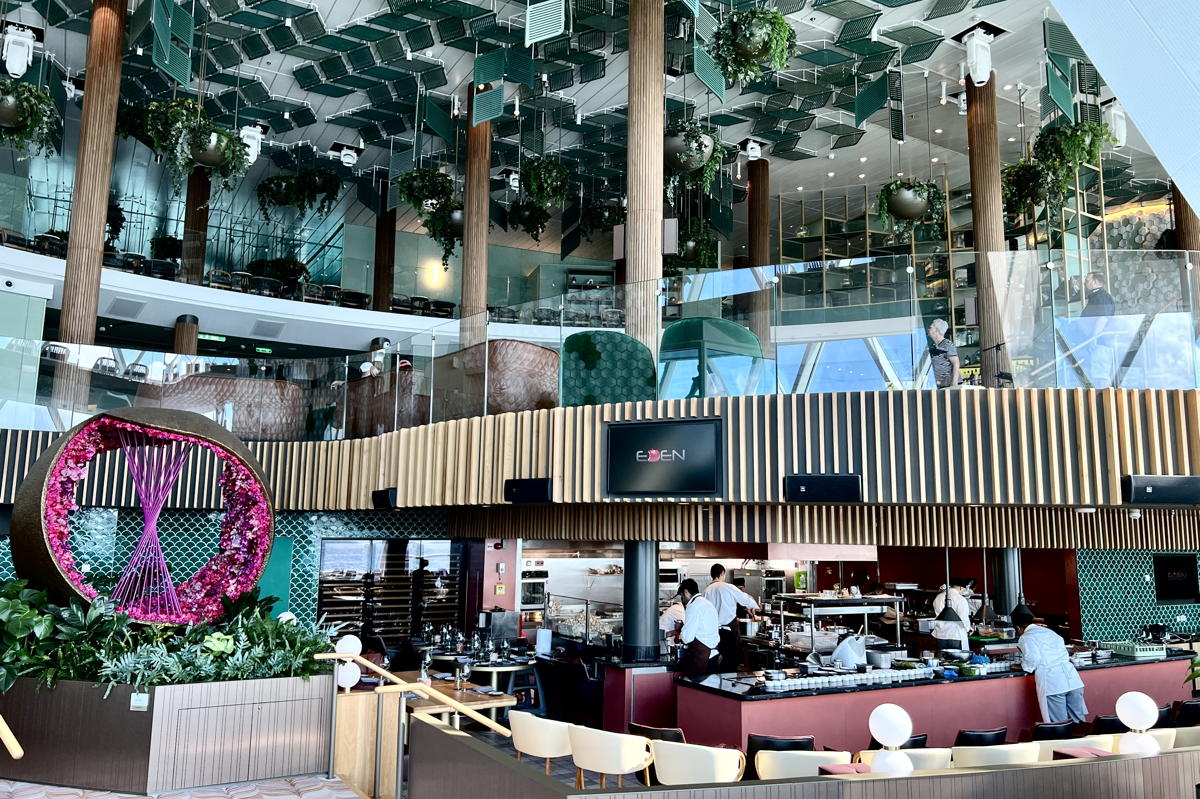 Agents have also been posting about the accommodations, which blur the boundaries between indoor and outdoor living.

The Infinite Veranda staterooms, for example, allow passengers to enjoy open air access to the sea and with the press of a button.

Beyond also has two-story Edge Villas with outdoor plunge pools and 1,900-square-feet Iconic Suites, the largest in the fleet, with a private sundeck. 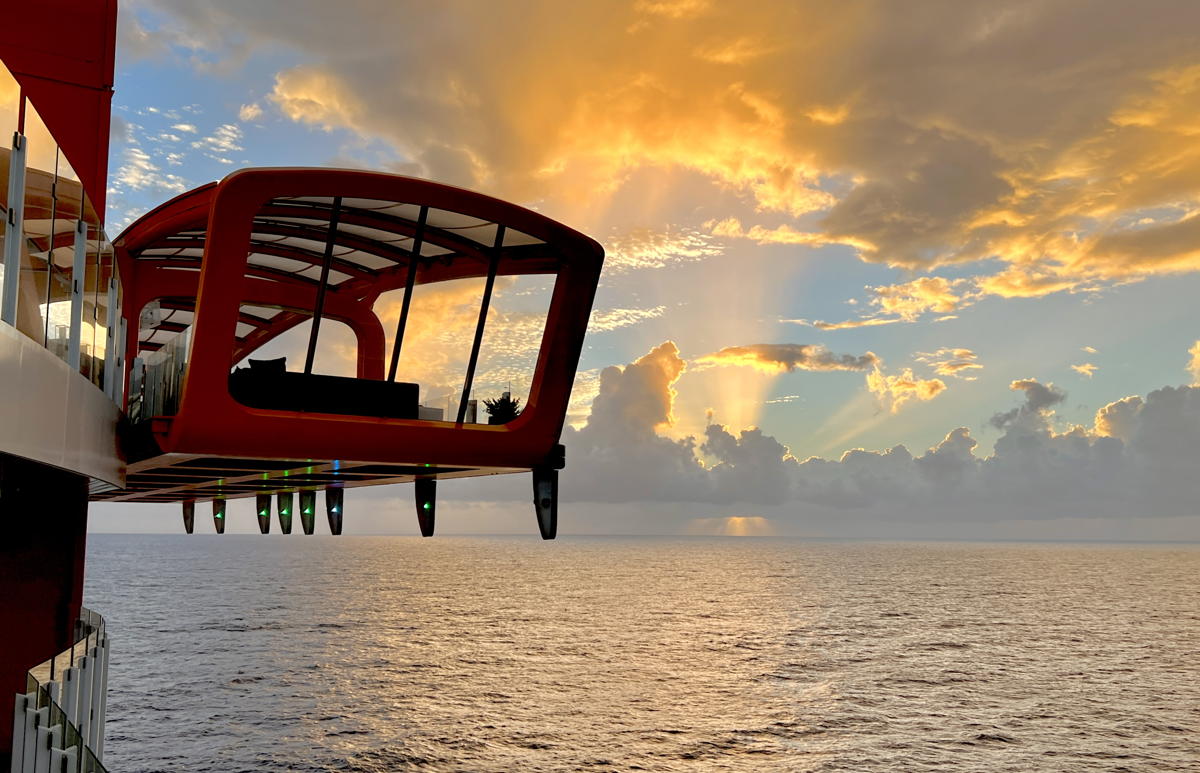 “My goal is for them is to become even better Celebrity ambassadors so they can talk about the experience because it's so unique,” Yeomans said.

But the real expectation this week is for participants to make at least three Future Cruise Bookings, and secure at least one group, while on board the ship.

Agents are able to secure staterooms with a $100 deposit per person and get their clients an extra onboard credit.

And the bar is set very high. 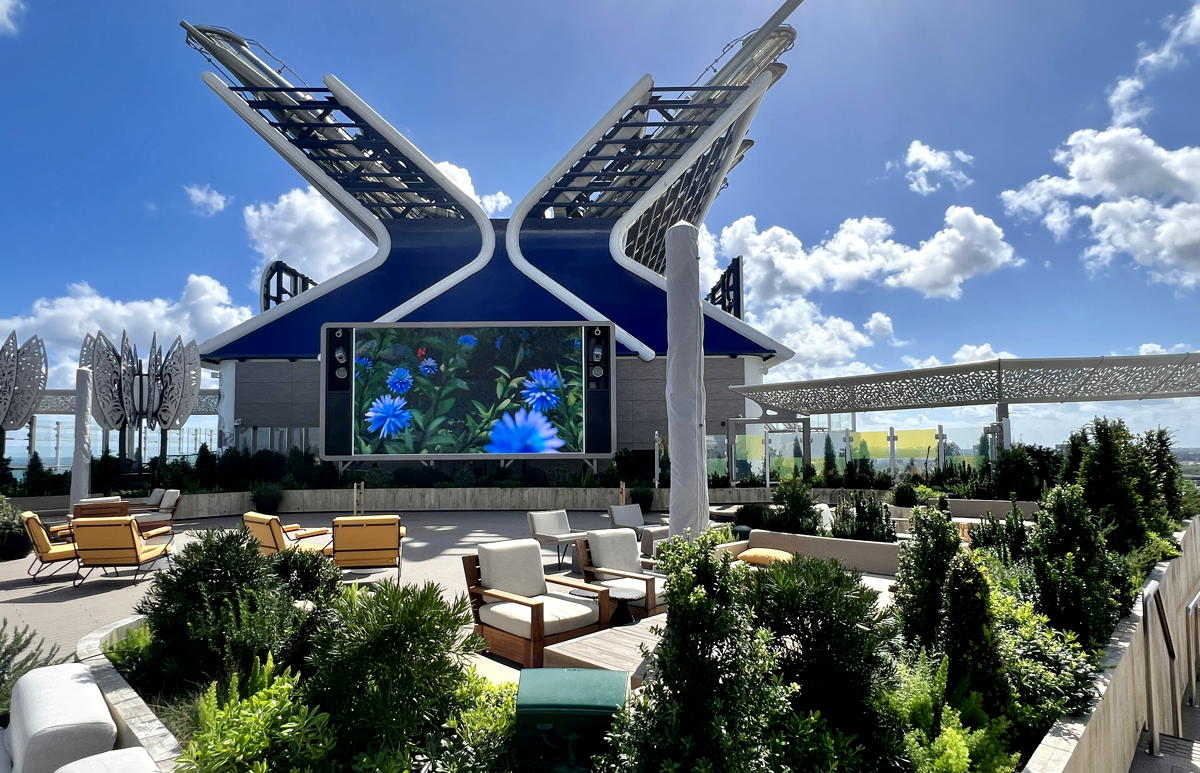 On the last “Edge FAM” Yeomans hosted with TTAND – a voyage from Barcelona to Rome in August – agents on board broke all records on future cruise sales within the company for their group size.

Based on some of the early numbers that have come in, Yeomans believes this week’s group is on track to set a new record.

“Some [agents] made future cruise bookings within, like, an hour of coming on board, which is unbelievable,” Yeomans said.

Stay tuned as PAX brings you more exclusive coverage from Celebrity’s “Rock Star FAM” on board Celebrity Beyond.