Only 3% of travellers at YYZ and YVR are waiting 30+ minutes in line, feds say

More help is on its way!

That was the message – or tweet, we should say – that Transport Minister Omar Alghabra had for travellers on Wednesday (June 8) as the government continues to work at reducing wait times at Canada’s airports – at Toronto Pearson, in particular.

The hot button issue has been boiling over for weeks now as reports of air passengers being forced to stand in crazy-long security lines, not receiving their luggage or being held on arriving aircraft for unreasonable periods of time persist at Canada’s largest airport.

YYZ’s operational woes, which, according to the Greater Toronto Airports Authority (GTAA), has something to do with staffing shortages, is irking everyone, from the International Air Transport Association (IATA) to Toronto Mayor John Tory (who, earlier this week, called the situation unacceptable) to one former NHL hockey player.

The timing couldn’t be worse either as border rules around the world ease up and the pent-up demand for travel – after more than two years of pandemic-related lockdowns and restrictions – takes hold.

Air travellers arriving in Canada between the week of April 25 and May 1, for example, was 17 times higher compared to the same period last year, according to Canada Border Services Agency.

“The goal is to streamline services"

Releasing a joint statement for the second time in less than two weeks, federal officials on Wednesday assured the travelling public that wait times at Canadian airports – thanks to streamlined services – are decreasing.

"The Government of Canada recognizes the impact that significant wait times at some Canadian airports are having on travellers,” the joint statement read. “We are working with airports, air carriers, baggage handlers, and other partners to implement solutions to reduce delays as we approach the summer peak season.”

“The goal is to streamline services for inbound and outbound passengers, so Canadians can travel smoothly and safely as the sector recovers from the COVID-19 pandemic.” 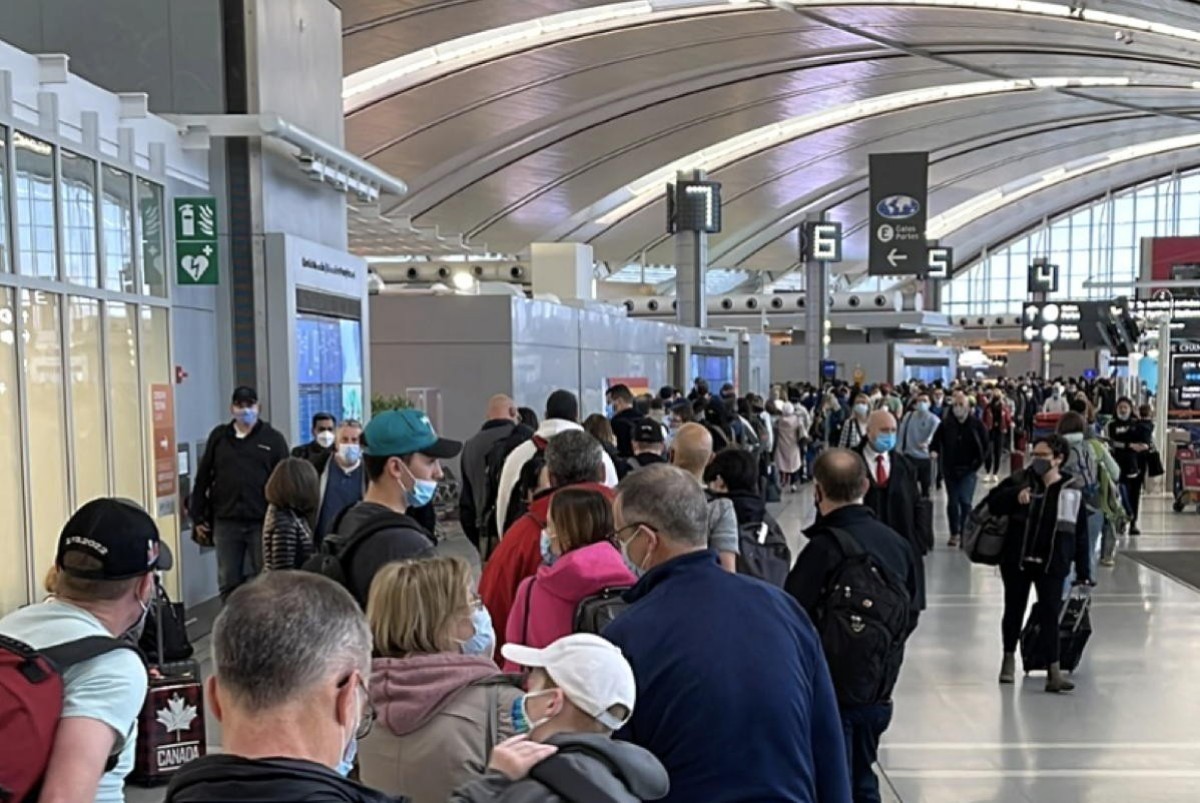 The politicians said their efforts are, indeed, having an impact on wait times at all major airports in Canada.

Well, with exception to some lingering headaches Toronto Pearson, perhaps.

Which the politicians said they are working on in collaboration with the GTAA, which oversees YYZ’s operations.

“…the vast majority of airports across the country are not seeing similar delays,” officials said, noting that just three per cent of all air passengers at Toronto Pearson and Vancouver International are now waiting more than 30 minutes in line.

As announced on May 27, the federal government plans to tackle wait times by adding hundreds of more screening officers at security checkpoints and open more border kiosks.

Meanwhile, the number of CATSA screening officers has “steadily increased” and is almost 100 per cent of summer targets at both Toronto Pearson and Vancouver International, where wait-times have been greatest, officials said. 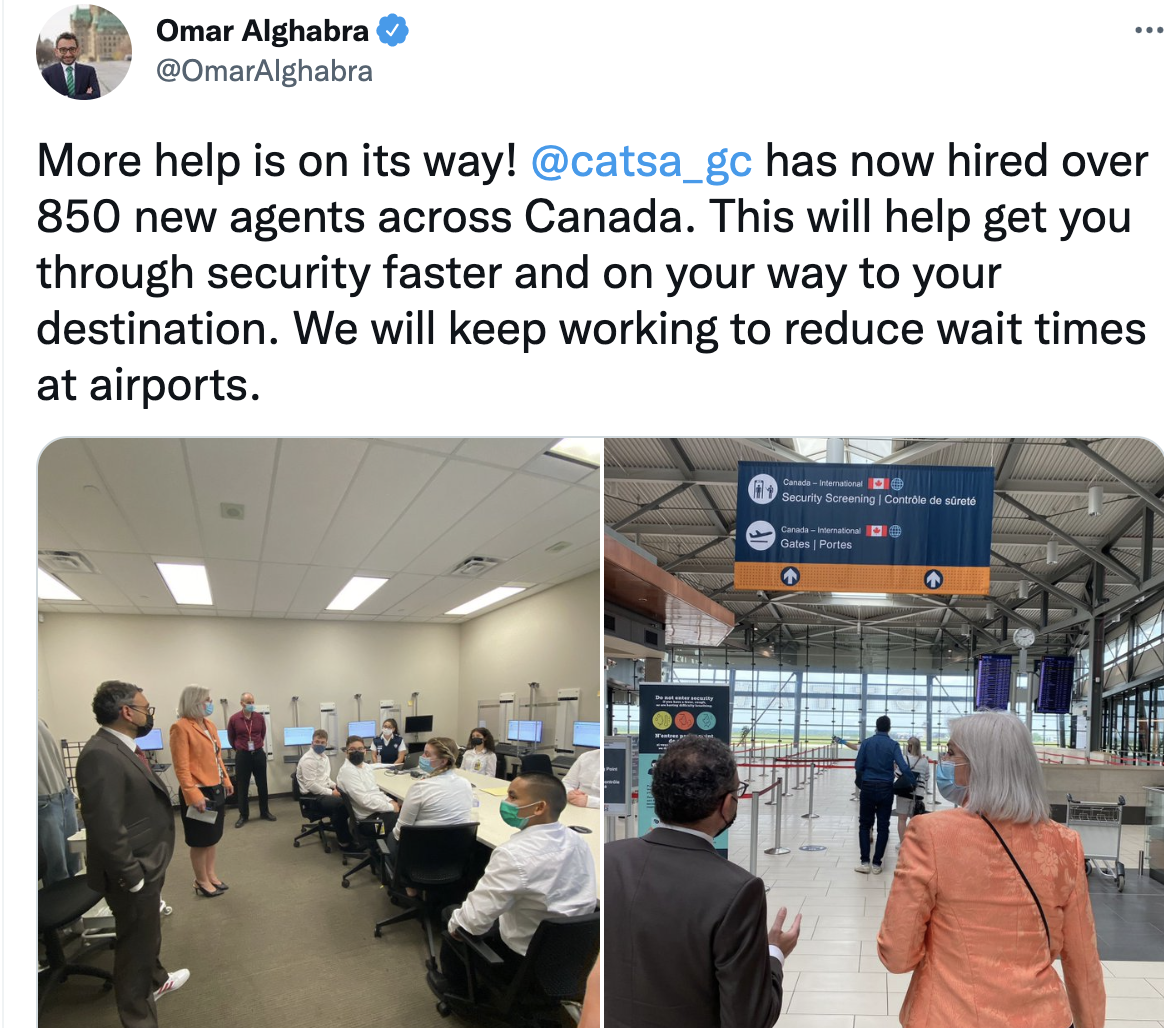 “Hiring continues, with 644 new CATSA recruits in the four largest airports, and 865 total across Canada. Almost 2,000 applications for screening positions are being processed,” their statement read.

The details reflect a change in tone for Minister Alghabra, who, last month, said out-of-practice travellers – combined with last-minute bookings and large volumes of flights leaving and arriving at the same time – were to blame for airport delays. Not a lack of staffing.

A task force involving Transport Canada, the Public Health Agency of Canada, the CBSA and CATSA has also been formed.

Travellers who complete their ArriveCAN before coming to the airport helps remove unnecessary delays, the politicians added, and PHAC is adding more staff on select days to verify that travellers have completed ArriveCAN on arrival. 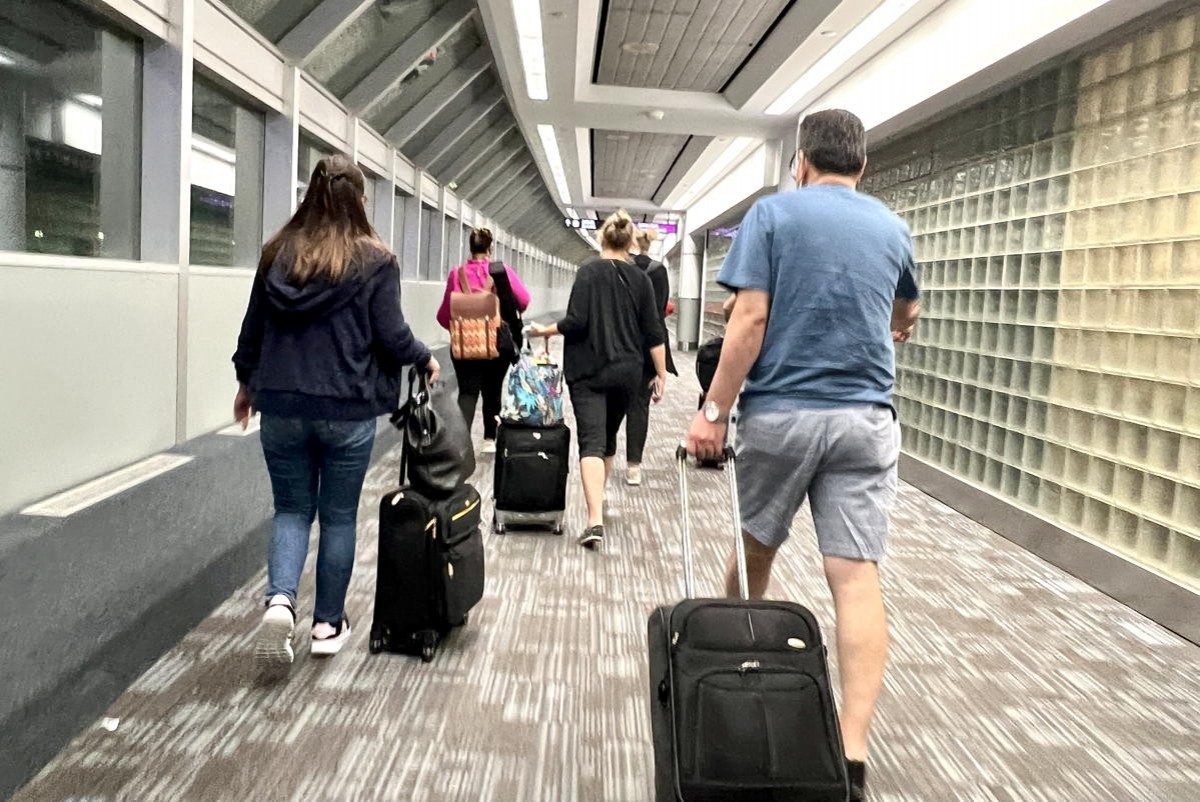 Airports, airlines, and security providers are also working with CATSA to adjust scheduling to ensure screeners are available during peak periods.

And the hiring process for officers is being sped up, officials said.

Airports and airlines, at the same time, have increased their communication on social media, signage and multimedia screens to “better prepare passengers for the pre-boarding screening and arrival processing requirements, facilitating a smoother passage in and out of airports,” officials said.

"We recognize that we have more work to do, particularly for international arrivals at our largest airports, and we will continue to work with all orders of governments and partners to reduce the delays in the travel system,” said Alghabra, Duclos, Mendicino and Boissonnault.

"It's not where you want to be," Dee told CBC Radio.

"In terms of the customs delays, until the pandemic-era inspections are changed, I hate to think that this is something that's going to plague us through the entire summer," Dee told CBC.

"Things should get a little bit easier for those travelling after Labour Day. Unfortunately, that's also when schools get back so families won't be able to travel as much.”