Earth Day 2020: Aviation innovations that put the ‘eco’ in economy class – and beyond

It’s no secret that flying isn’t the most environmentally-friendly mode of transportation.

Prior to the COVID-19 pandemic, which has led many airlines to ground their fleet, airlines accounted for approximately two per cent of annual global carbon dioxide emissions, that amount could climb even higher as more travellers take to the sky each year: approximately 4.6 billion passengers flew in 2019, up from 4.3 billion in 2018.

In Sweden, the environmental impact of flying has even spawned a phrase: flygskam, or ‘flight shame,’ denoting a desire to reduce one’s participation in air travel, as was illustrated last fall by Swedish climate activist Greta Thunberg opting to cross the Atlantic Ocean by sailboat.

However, with commercial aviation a fixture of modern life – not to mention a pillar of the travel industry – the industry’s environmental woes will require creative solutions, which includes more than just the use of fuel-efficient aircraft.

Fortunately, there’s no shortage of bright ideas when it comes to the greening of the airline sector.

With aircraft themselves – and, more specifically, the fuel they burn – being the chief cause of the industry’s CO2 emissions, regular fleet updates are an integral step for airlines in reducing their carbon footprint.

When it comes to fleet renewals, Canada’s airlines have provided a good example to the world, with Air Canada, WestJet, Air Transat and Sunwing all regularly bringing on the latest aircraft.

According to a statement by WestJet, emissions from the carrier’s fleet of Boeing Next-Generation 737 aircraft (600, 700 and 800 series) are approximately 15 to 30 per cent lower on a per seat basis than its previous fleet of 737-200 series aircraft. Little changes can also help in reducing emissions: by using winglets – small wing-tip extensions – since 2003, the carrier has reported reductions in fuel consumption by up to 2.7 per cent per flight on its 737 700 and 800-series aircraft.

Another modern aircraft, the Airbus A321neoLR, has also made an impact for Canadian airlines. According to Air Transat, the A321neoLR, when compared to previous generation Airbus aircraft, consumes more than 15 per cent less fuel and produces about 5,000 fewer tonnes of CO2 a year, while also reducing NOx emissions—which contribute to smog and acid rain— by 50 per cent.

And while the technology is still being perfected – with fully-electric long-haul commercial flights still many years away – many aviation companies are already hard at work on producing hybrid or fully-electric aircraft, significantly reducing fuel consumption or, in the case of the full electric models, eliminating it altogether.

For now, such aircraft are starting out small: last year, Israel-based firm Eviation displayed its nine-seat all-electric aircraft, dubbed Alice, capable of flying up to 1,040km at speeds of 440km/h at 3,000 metres

But larger hybrid and electric aircraft are waiting in the wings.

Among these are Airbus’ E-Fan X model, a hybrid aircraft which the company expects to begin testing in 2021, along with a concept for a hybrid electric version of the A320, which the manufacturer envisions taking flight sometime after 2035.

According to a 2018 study conducted by the International Air Transport Association (IATA), it’s estimated that airlines generated about 6.7 million tons of cabin waste that year.

Going a step further, an analysis of 8,400 pounds of garbage collected from 145 flights into Madrid – lead by a research team from Barcelona’s University Pompeu Fabra – determined that the trash in question consisted of 33 per cent food waste, 28 per cent cardboard and paper waste and roughly 12 per cent plastic.

While many airlines have moved – or are moving – to eliminate unnecessary single-use plastic such as straws or stir sticks, there’s still room for improvement as evidenced by the above example.

Last May, Australian carrier Qantas operated what it called the “first-ever commercial flight to produce no landfill waste,” during which approximately 1,000 single-use plastic items were substituted with sustainable alternatives or removed altogether from the flight, while alternative products used during the flight included meal containers made from sugar cane and cutlery made from crop starch, all of which is fully compostable.

This zero-waste approach has also been showcased in a concept by London-based design firm PriestmanGoode, which has created a prototype airline meal tray made of repurposed coffee grounds and husks, accompanied by dishes made of pressed wheat bran and a spork made of coconut palm wood. 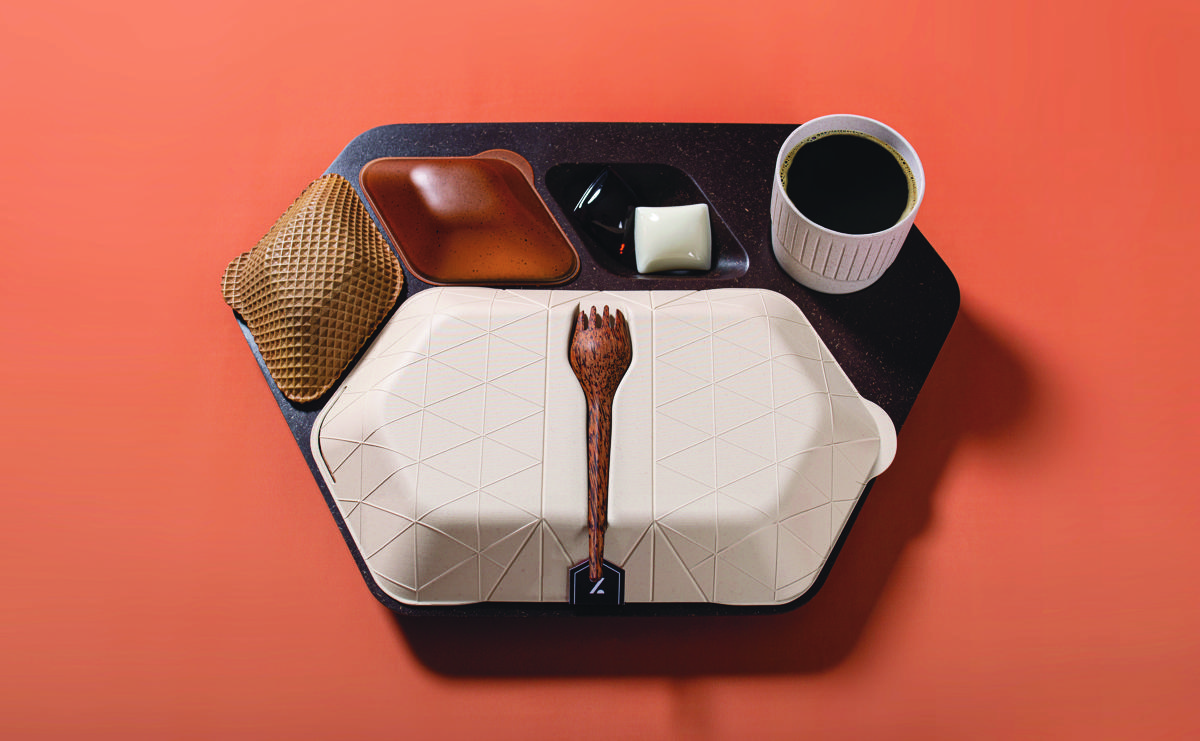 Even before those airline meals reach the plane, there’s steps that can be taken to reduce the environmental impact at the food production stage.

Housed in an unassuming setting – a previously-abandoned steel mill in Newark, New Jersey – is the world’s largest vertical farm, operated by AeroFarms.

Spanning 70,000 square feet, the operation can generate up to 2 million pounds of produce each year, using an indoor hydroponic system that requires 95 per cent less water than traditional field farming methods ­– and at faster growth rates.

A similar partnership has arisen between producer Crop One Holdings and Emirates Flight Catering, which in 2018, announced a $40 million deal to build the world’s largest vertical farm in Dubai.

This article originally appeared in PAX magazine's February 2020 issue. It has been slightly modified to reflect the current COVID-19 pandemic.