Alghabra shifts blame for airport delays: “Airlines have a duty as well”

This isn’t just on us, ya know.

At least that’s how it appears the federal government is viewing the turbulence that is rocking Canada’s airports – Toronto Pearson International (YYZ), in particular.

Speaking to media on Tuesday (June 21), Transport Minister Omar Alghabra drew attention to the role airlines play in tempering the excessive lineups and wait times that have plagued airports in recent weeks.

Alghabra suggested that Canadian carriers take some ownership for the operational issues that have caused delayed or cancelled flights and slowed luggage delivery.

Federal officials, in recent weeks, have been pulling every PR string to keep travelling Canadians up to date on what it is doing to fix the problem, releasing regular news releases containing updates on wait times at security screening stations, for example.

By the government’s own accounts, it appears things are improving at airports across the country as Ottawa ramps up hiring and staffing as the busy travel season kicks in.

But it isn’t solely up to the government to lead the charge, Minister Alghabra implied Tuesday.

“Airlines have a duty as well,” Alghabra told reporters in Ottawa. “We're hearing some stories about luggage issues and flights cancelling…We want to make sure that the airlines as well do their part.”

"We're making sure that the airlines keep up their end of the bargain.''

But the National Airlines Council of Canada, which represents Air Canada, Air Transat, Jazz Aviation and WestJet, maintains that they’ve already done that, stating that the delays at airports are not due to staffing issues at the airline level, but rather at NAV Canada (which runs Canada’s air navigation service), CATSA and CBSA, the Canadian Press reported. 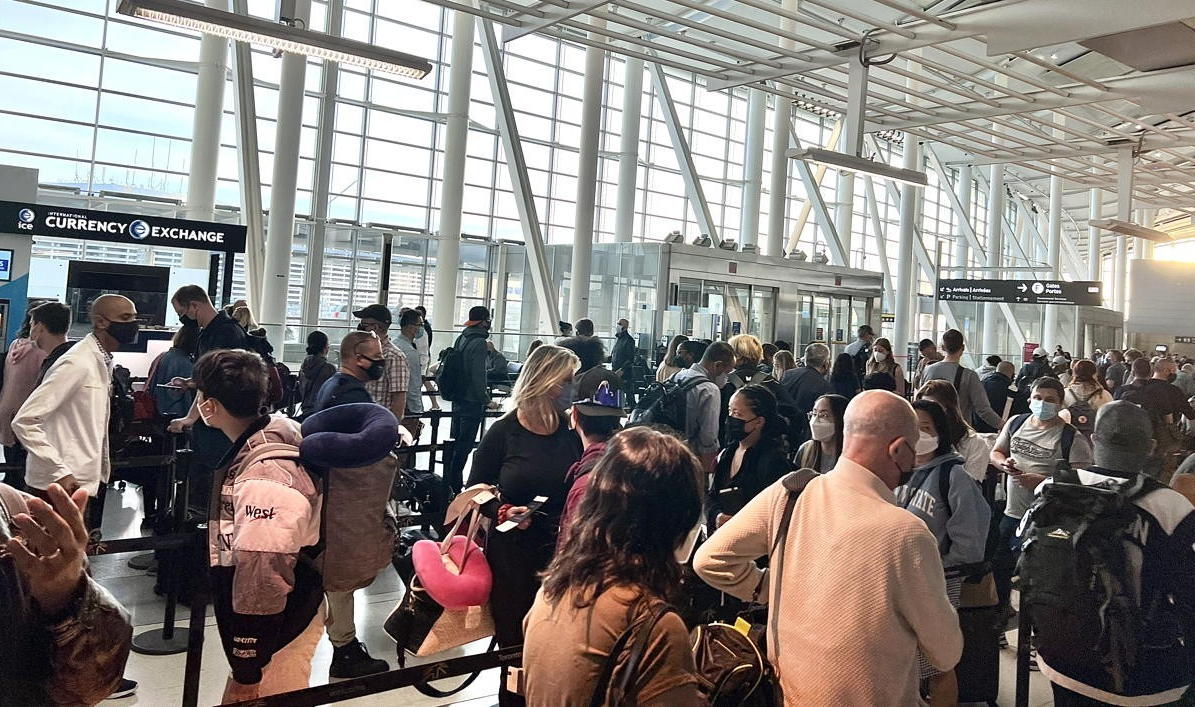 CBSA and PHAC have also streamlined the process to ID travellers who are required to undergo testing at Toronto Pearson.

This follows the suspension of the federal vaccine mandate for domestic and outbound international travel, which means unvaccinated Canadians can now board planes and trains.

Randomized on-arrival COVID-19 testing has also been temporarily paused until the end of the month to help speed up airport processing.

At the same time, airline passengers continue to report last-minute changes to their bookings, from take-off delays to aircraft changes to, in some cases, flights being rescheduled to a completely different day.

Speaking to the Canadian Press, John Gradek, head of McGill University's aviation management program, said airlines have used Ottawa as a "scapegoat" while scheduling more flights than they have staff or planes to provide, which has caused delays and cancellations.

"The airlines basically have shot themselves in the foot by really throwing a lot more capacity at the world than they have resources to be able to handle,” Gradek said.

“They're being very aggressive in the marketplace, getting lots of traffic…airplanes are often at 90 per cent load factor and don't have any idle assets hanging around just in case things go wrong. And then that's a formula for disaster when things do start to go wrong.”

In a statement on Monday, the Government of Canada recognized the “significant wait times” at Canadian airports.

“This is a global phenomenon due to the increase in air traffic across the world,” federal officials said.

But officials insist the situation at Canadian airports is getting better.

They say the wait times at Toronto Pearson’s security lines are decreasing, with about 91 per cent of passengers now being screened within 15 minutes.

Calgary International Airport is improving, with about 86 per cent of passengers now screened within 15 minutes, officials said.

About 84 percent of passengers were screened within 15 minutes at Vancouver International, which is fewer than the previous week, “but still a significant improvement since mid-May.”

And about 85 percent of passengers were screened within 15 minutes at Montreal Trudeau airport, which is “similar to the previous week,” officials said Monday.

An update on the removal of metering – the process of holding passengers on arriving aircraft for long periods of time – has not yet been shared.